Come celebrate the 50th Anniversary of the World-Famous London Bridge — The Soul of Lake Havasu City.

How did this blessing to a nation make its way from rainy London to the dust-dry Mojave Desert in Arizona? Bearing bullet holes, birds, bats and historic graffiti, the London Bridge is hollow inside but chock full of amazing stories you must see to believe!

For nearly 2,000 years, a series of bridges has spanned the River Thames in London. The bridge spanning Lake Havasu City’s Bridgewater Channel today was built 190 years ago in 1831. Due to a heavy increase in vehicle traffic in the early 20th century, this bridge began sinking into the River Thames. So the City of London had it dismantled and sold it at auction in 1967.

McCulloch had an idea that many thought was odd: reconstruct the bridge as an attraction to draw tourists & prospective buyers of residential lots.

Robert P. McCulloch was the winning bidder at $2.4 million ($19 million in today’s dollars). As Lake Havasu City’s founder, he teamed up with C.V. Wood, Disneyland’s master planner and the theme park’s first employee, to design his dream city. An eccentric but visionary entrepreneur known for the McCulloch chainsaw brand, McCulloch had an idea that many thought was odd: reconstruct the bridge as an attraction to draw tourists and prospective buyers of residential lots. 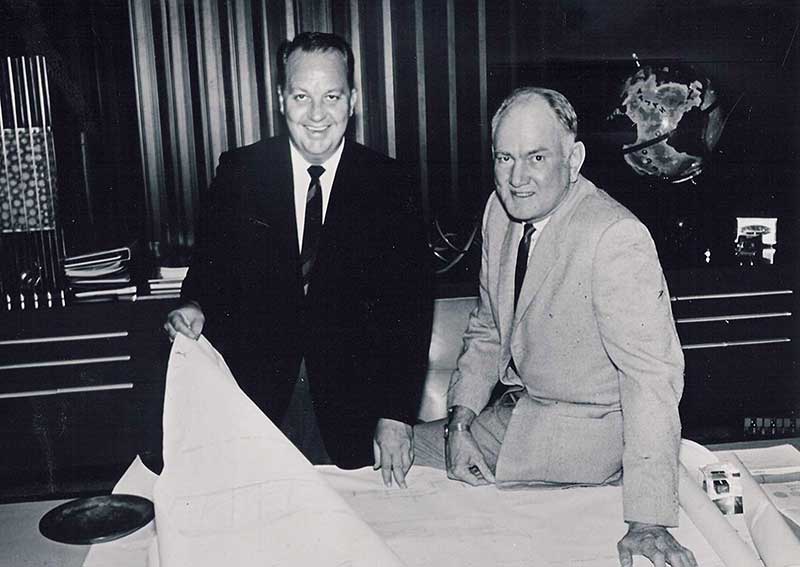 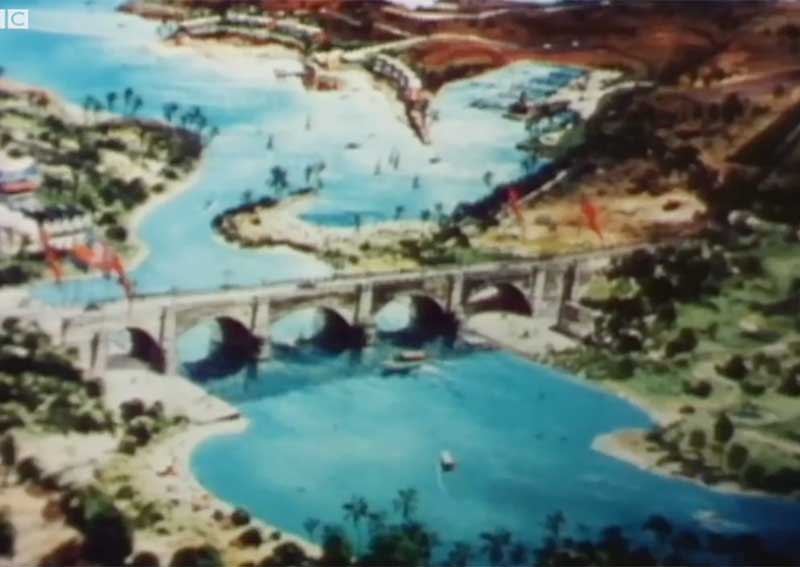 A TRANSATLANTIC VISION: The London Bridge is a testament to American ingenuity and our nation’s enduring relationship with Great Britain. 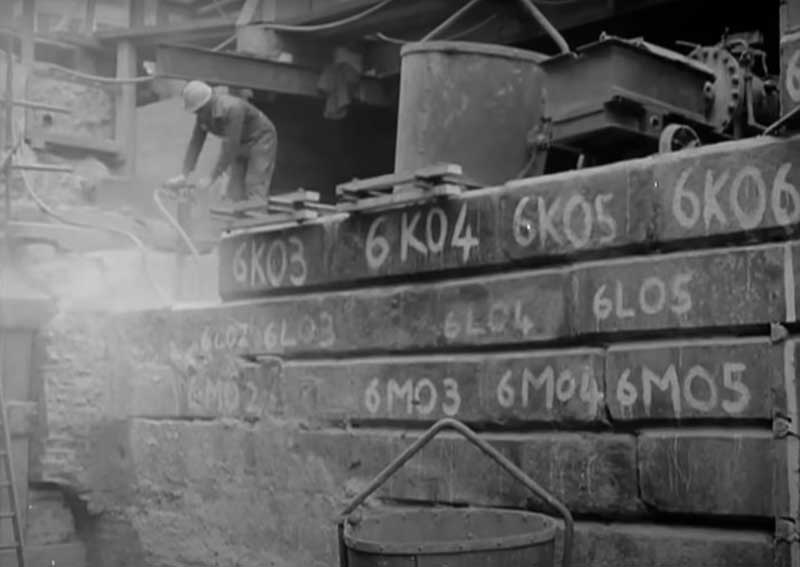 DISMANTLING AN ICON: The world’s most famous bridge was disassembled to cross an ocean. 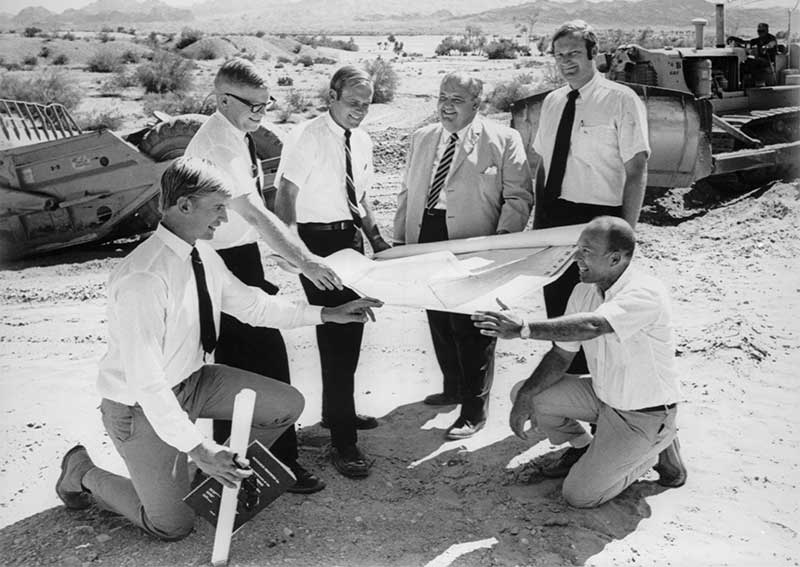 AN AMERICAN DREAM IN THE MOJAVE DESERT: Teamwork, innovation and the spirit of achievement brought McCulloch’s vision to life. 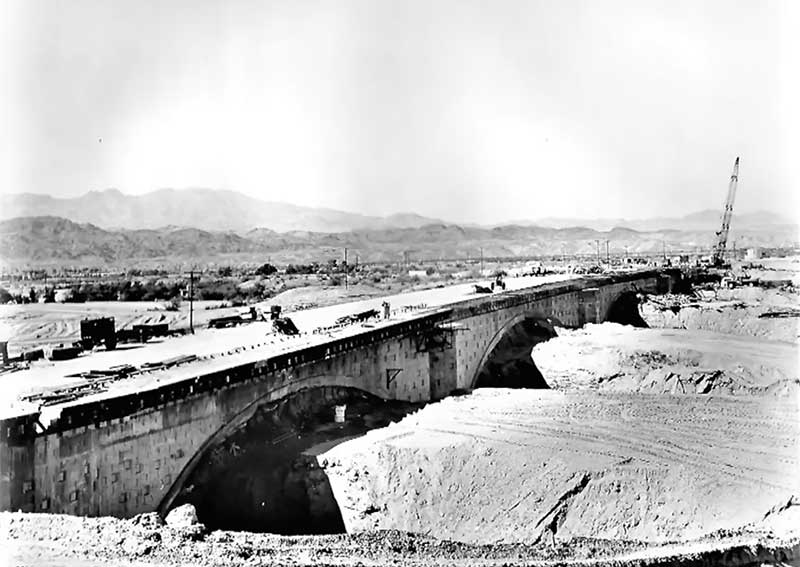 DREDGING THE CHANNEL AND RECONSTRUCTING THE BRIDGE: The dirt from the dig was used to support the arches while they were reconstructed. 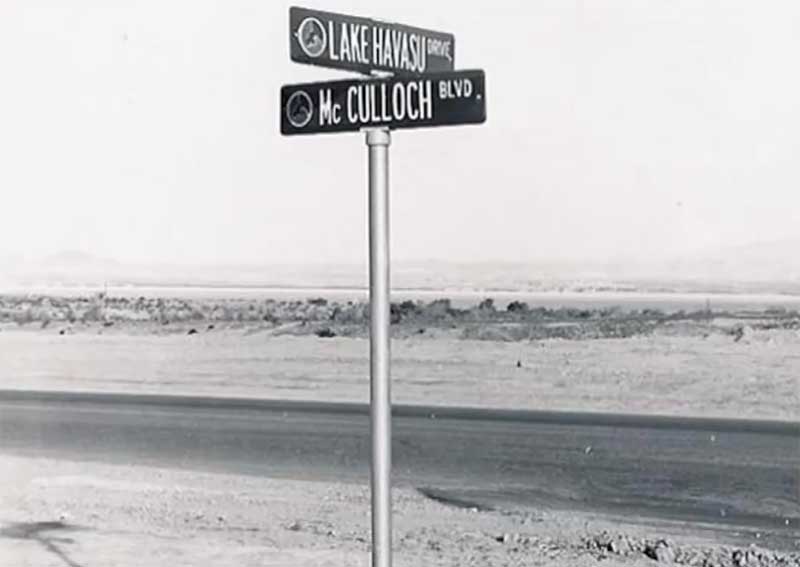 A CROSSROADS OF OPPORTUNITY: Far from crowded London, The London Bridge attracted prospective buyers of residential lots in the barren desert. 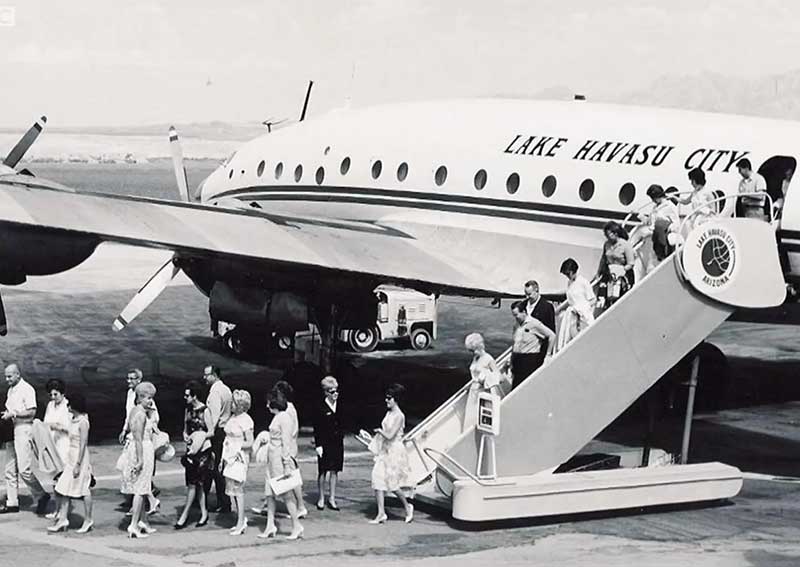 The London Bridge was shipped in sections across the Atlantic Ocean and through the Panama Canal. The first section arrived at the Port of Los Angeles on July 5, 1968. From there, the sections were transported overland to Lake Havasu City. The shipping and reconstruction of the bridge, and dredging of a man-made channel underneath, cost $7 million.

On October 10, 1971—after three years of meticulous reconstruction—the London Bridge was rededicated with a vibrant celebration still remembered as the largest in the city’s history. To welcome visitors and support lot sales, McCulloch Properties also built the English Village: an open-air mall that’s thriving today with restaurants, shops and fun things to see and do.

Mcculloch’s idea paid off in spades. Today Lake Havasu City is home to over 57,000 residents and a major driving force for tourism to the region.

10 Fascinating Facts about the London Bridge

“London Bridge is made more of souls than of stone. It’s everyone who ever lived on it and died on it and worked on it and walked on it. And now it’s here in the United States — a precious gift to the people of America. May it stand forever.” — FROM LONDON BRIDGE, MCCULLOCH OF LONDON LIMITED (1971)

How the London Bridge went from London to Lake Havasu City presented by the BBC.